PeaZip is an OS-portable archiver tool (released for Windows and Linux); it supports it's native Pea archive format (featuring compression, splitting and flexible encryption and integrity check schemes) and other mainstream formats, with especial focus on handling open formats.

PeaZip doesn't follow the Explorer-like interface paradigm; the interface is more similar to a CD/DVD-burner application, allowing the user to:

- save and restore layout of archives (input files and folders list) to speed up definition of archiving and backup operations;
- save job definition (as plain text, to be used in any script language);
- have a detailed job log after each operation;

The interface is fully skinnable (skins can be customised and saved as plain text to be re-edited as freely as possible) and uses customisable transparency.

What's New in This Release:
This update is focused in giving the program more usability, through many UI improvements and fixes.
Windows version now runs fine also on 9x systems; most used functions as add to archive or extract here are accessible from shortcuts in SendTo menu;
Windows installer now asks for optionally creating additional file associations.
For Linux is now available also a Gtk2 build (and the traditional build for Gtk1).
Both Linux versions are standalone, you just need to unpack and run them. 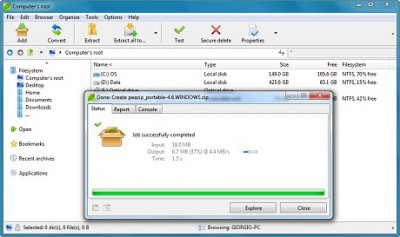 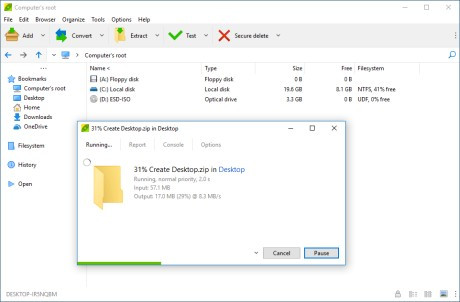 
Pea-Peach 0.12
Pea (an acronym for Pack, Encrypt, Authenticate) is OS-portable archiving software that offers flexible security options (up to AES-E


K7Z 0.5
Use K7Z if you want to create/extract a password-protected archive or update an existing archive. Ark (2.6.3) is very handy but i


makeself 2.1.4
makeself.sh is a small shell script that generates a self-extractable tar.gz archive from a directory


XFE 0.84
X File Explorer (Xfe) is an MS-Explorer like file manager for X