The goal of the FlightGear project is to create a sophisticated flight simulator framework for use in research or academic environments, for the development and pursuit of other interesting flight simulation ideas, and as an end-user application. We are developing a sophisticated, open simulation framework that can be expanded and improved upon by anyone interested in contributing.

There are many exciting possibilities for an open, free flight sim. We hope that this project will be interesting and useful to many people in many areas.

FlightGear is a free flight simulator project. It is being developed through the gracious contributions of source code and spare time by many talented people from around the globe. Among the many goals of this project are the quest to minimize short cuts and "do things right", the quest to learn and advance knowledge, and the quest to have better toys to play with.

The idea for Flight Gear was born out of a dissatisfaction with current commercial PC flight simulators. A big problem with these simulators is their proprietariness and lack of extensibility. There are so many people across the world with great ideas for enhancing the currently available simulators who have the ability to write code, and who have a desire to learn and contribute. Many people involved in education and research could use a spiffy flight simulator frame work on which to build their own projects; however, commercial simulators do not lend themselves to modification and enhancement. The Flight Gear project is striving to fill these gaps.

There are a wide range of people interested and participating in this project. This is truly a global effort with contributors from just about every continent. Interests range from building a realistic home simulator out old airplane parts, to university research and instructional use, to simply having a viable alternative to commercial PC simulators.

1. JSBSim: JSBSim is a generic, 6DoF flight dynamics model for simulating the motion of flight vehicles. It is written in C++. JSBSim can be run in a standalone mode for batch runs, or it can be the driver for a larger simulation program that includes a visuals subsystem (such as FlightGear.) In both cases, aircraft are modeled in an XML configuration file, where the mass properties, aerodynamic and flight control properties are all defined.

2. YASim: This FDM is an integrated part of FlightGear and uses a different approach than JSBSim by simulating the effect of the airflow on the different parts of an aircraft. The advantage of this approach is that it is possible to perform the simulation based on geometry and mass information combined with more commonly available performance numbers for an aircraft. This allows for quickly constructing a plausibly behaving aircraft that matches published performance numbers without requiring all the traditional aerodynamic test data.

3. UIUC: This FDM is based on LaRCsim originally written by the NASA. UIUC extends the code by allowing aircraft configuration files instead and by adding code for simulation of aircraft under icing conditions.

UIUC (like JSBSim) uses lookup tables to retrieve the component aerodynamic force and moment coefficients for an aircraft... and then uses these coefficients to calculate the sum of the forces and moments acting on the aircraft.

Over 20,000 real world airports included in the full scenery set.
Correct runway markings and placement, correct runway and approach lighting.
Taxiways available for many larger airports (even including the green center line lights when appropriate.)
Sloping runways (runways change elevation like they usually do in real life.)
Directional airport lighting that smoothly changes intensity as your relative view direction changes.
World scenery fits on 3 DVD's. (I'm not sure that's a feature or a problem!) But it means we have pretty detailed coverage of the entire world.
Accurate terrain worldwide, based on the most recently released SRTM terrain data.) 3 arc second resolution (about 90m post spacing) for North and South America, Europe, Asia, Africa, and Australia.
Scenery includes all vmap0 lakes, rivers, roads, railroads, cities, towns, land cover, etc.
Nice scenery night lighting with ground lighting concentrated in urban areas (based on real maps) and headlights visible on major highways. This allows for realistic night VFR flying with the ability to spot towns and cities and follow roads.
Scenery tiles are paged (loaded/unloaded) in a separate thread to minimize the frame rate hit when you need to load new areas.

FlightGear has extremely smooth and fluid instrument animation that updates at the same rate as your out-the-window view updates (i.e. as fast as your computer can crank, and not artificially limited and chunky like in some sims.)

FlightGear also accurately models many instrument and system failures. If the vacuum system fails, the HSI gyros spin down slowly with a corresponding degradation in response as well as a slowly increasing bias/error.

The intention of FlightGear is to look nice, but not at the expense of other aspects of a realistic simulator. Our focus is not on competing in the "game" market and not on the ultra-flashy graphic tricks.

The result is a simulator with moderate hardware requirements to run at smooth frame rates. You can be reasonably happy on a $500-1000 (USD) machine (possibly even less if you are careful) and don't necessarily need $3000 (USD) worth of new hardware like you do with the many of the newest games.

That said, the more hardware you throw at FlightGear, the better it looks and runs, so don't feel like you have to chuck your expensive new hardware if you just purchased it. :-)

Using the properties tree it is possible to monitor just about any internal state variable in FlightGear. It's possible to remotely control FlightGear from an external script. You can create model animations, sound effects, instrument animations and network protocols for about any situation imaginable just by editing a small number of human readable configuration files. This is a powerful system that makes FlightGear immensely flexible, configurable, and adaptable.

A number of networking options allow FlightGear to communicate with other instances of FlightGear, GPS receivers, external flight dynamics modules, external autopilot or control modules, as well as other software such as the Open Glass Cockpit project and the Atlas mapping utility.

A generic input/output option allows for a user defined output protocol to a file, serial port or network client.

A multi player protocol is available for using FlightGear on a local network in a multi aircraft environment, for example to practice formation flight or for tower simulation purposes.

The powerful network options make it possible to synchronize several instances of FlightGear allowing for a multi-display, or even a cave environment. If all instances are running at the same frame rate consistently, it is possible to get extremely good and tight synchronization between displays.

Flight Gear and its source code have intentionally been kept open, available, and free. In doing so, we are able to take advantage of the efforts of tremendously talented people from around the world. Contrast this with the traditional approach of commercial software vendors, who are limited by the collective ability of the people they can hire and pay. Our approach brings its own unique challenges and difficulties, but we are confident (and other similarly structured projects have demonstrated) that in the long run we can outclass the commercial "competition."

Contributing to Flight Gear can be educational and a lot of fun. A long time developer, Curtis Olson, had this to say about working on Flight Gear:

Personally, Flight Gear has been a great learning experience for me. I have been exposed to many new ideas and have learned a tremendous amount of "good stuff" in the process of discussing and implementing various Flight Gear subsystems. If for no other reason, this alone makes it all worth while. 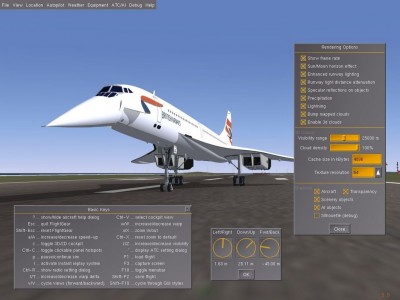 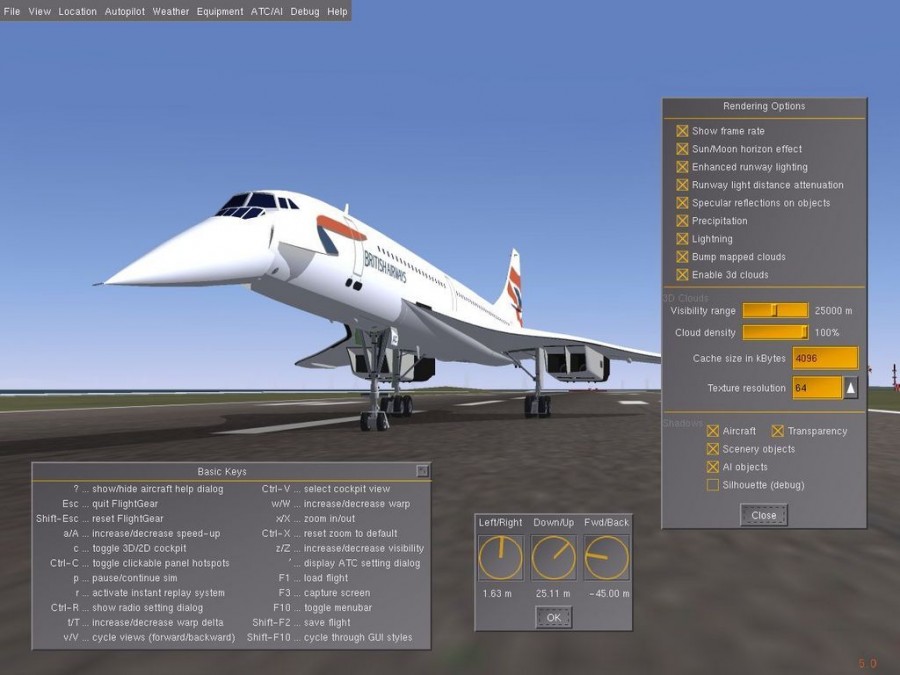 
Atlas for FlightGear 0.3
Atlas aims to produce and display high quality charts of the world for users of FlightGear, an open source flight simulator


X-Plane 8.50
X-Plane project is the world's most comprehensive, powerful flight simulator, and has the most realistic flight model available