KDE is a powerful Free Software graphical desktop environment for Linux and Unix workstations. It combines ease of use, contempora

It combines ease of use, contemporary functionality, and outstanding graphical design with the technological superiority of the Unix operating system.

We believe that the UNIX operating system is the best operating system available today. In fact UNIX has been the undisputed choice of the information technology professional for many years. When it comes to stability, scalability and openness there is no competition to UNIX. However, the lack of an easy to use contemporary desktop environment for UNIX has prevented UNIX from finding its way onto the desktops of the typical computer user in offices and homes.

UNIX dominates the server market and is the preferred computing platform for computing professional and scientists. Without UNIX the internet would not be. But UNIX did not address the needs of the average computer user.

This fact is particularly unfortunate since a number of implementations of UNIX (Debian GNU/Linux, FreeBSD, NetBSD etc.) are freely available on the internet. All of which are of exceptional quality and stability.

With KDE there is now an easy to use contemporary desktop environment available for UNIX. Together with a free implementation of UNIX such as GNU/Linux, UNIX/KDE constitutes a completely free and open computing platform available to anyone free of charge including its source code for anyone to modify. While there will always be room for improvement we believe to have delivered a viable alternative to some of the more commonly found and commercial operating systems/desktops combinations available today. It is our hope that the combination UNIX/KDE will finally bring the same open, reliable, stable and monopoly free computing to the average computer user that scientist and computing professionals world-wide have enjoyed for years.

Authoring applications under UNIX/X11 used to be an extremely difficult and tedious process. KDE recognizes the fact that a computing platform is only as good as the amount of first class applications available to the users of that particular platform. In view of these circumstances the KDE Project has developed a first rate compound document application framework, implementing the latest advances in framework technology and thus positioning itself in direct competition to such popular development frameworks as for example Microsoft's MFC/COM/ActiveX technology. KDE's KParts compound document technology enables developers to quickly create first rate applications implementing cutting edge technology.

What's New in This Release:
Version 0.12.3 of Kopete replaces 0.11.3 in KDE 3.5.5, it includes support for Adium themes, performance improvements and better support for the Yahoo! and Jabber protocols.
Support for sudo in kdesu.
Support for input shape from XShape1.1 in KWin (KDE window manager).
Lots of speed improvements and fixes in Konqueror's HTML engine, KHTML.
CUPS 1.2 support in KDEPrint.
Big improvements in the number of translated interface elements in Chinese Traditional, Farsi, Khmer, Low Saxon and Slovak translations. 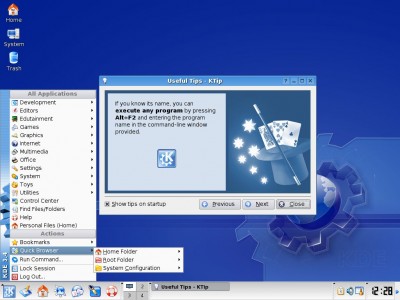 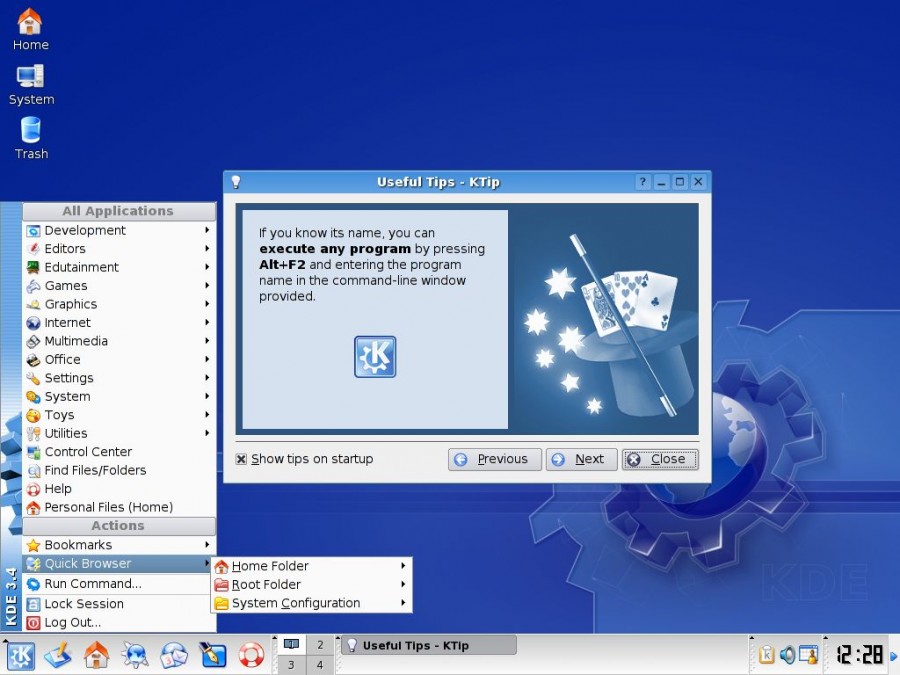 KDE 3.5.5
KDE is a powerful Free Software graphical desktop environment for Linux and Unix workstations. It combines ease of use, contempora


KOrganizer 3.4.2
Organizer is the calendar and scheduling application of the popular K Desktop Environment


Kamera 4:3.3.2-2sarge4
Kamera is a digital camera io_slave for KDE which uses gphoto2 and libgpio to allow access to your camera's pictures with the URL cam


SimpleKDE 3040101
SimpleKDE is a lightweight desktop environment for UNIX and UNIX based operating systems like Linux, FreeBSD, and OpenSolaris


libgnome 2.17.1
libgnome is a GNOME library. The GNOME 2.12 Desktop is the latest release of the ever popular, multi-platform free desktop environ


Athene Desktop Edition 4.1
Athene is a commercial operating system developed by Rocklyte Systems for use in the home and office