Here `text-mode' means that it runs in fullscreen mode or text window -- Command-line session on OS/2, Command Prompt on Windows 95/NT, console or xterm on Unix, Terminal on BeOS.

However, with version 1.50 the quasi-GUI version has appeared for OS/2. It looks much like textmode version, but utilizes native GUI menu, some dialog boxes, can be resized freely etc.

This does not mean of course that textmode version will be abandoned. X11 version (using Xlib) appeared in version 1.51. One of the main design concepts of NFTP is speed and effectiveness of text-mode keyboard interface. Everything can be done without mouse!

To clarify things a little, NFTP is not based on ncftp; neither on user interface nor on source code. The code is written from scratch (I have started the project in 1994, but NFTP was OS/2-only until Feb 1998).

Some ideas might seem to be common but still such ones are floating in the air, every decent FTP client should support things like directory caching and restarting transfers. Furthermore, NFTP user interface is quite different from ncftp's. Name "NFTP" comes from somewhat ugly "New FTP client".

Personally, I think NFTP is one of the most advanced FTP clients in the Unix world (although you might disagree with my opinion, of course). Under Windows and OS/2, it stands aside as almost all FTP clients for these systems are GUI-based (unlike NFTP). 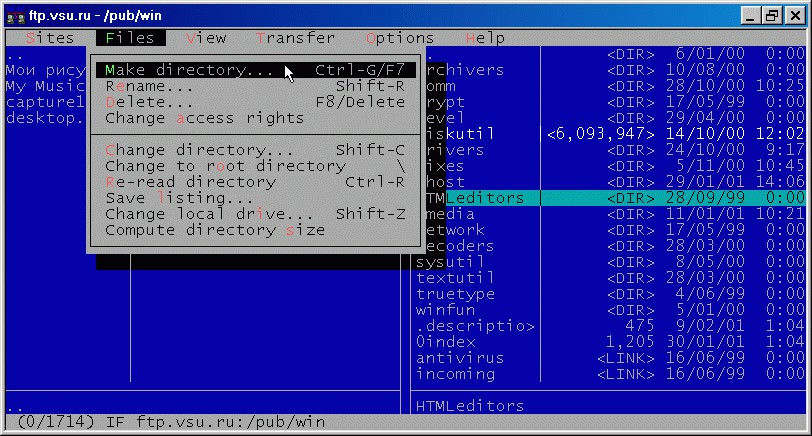 
BSFlite 0.82
BSFlite is a minimalistic, line-based AIM client for Unix. Instead of having a full screen console interface, BSFlite employs a co


Rhapsody IRC 0.28b
Rhapsody is an IRC client for Unix operating systems intended to be displayed on a text console or terminal


tcpick 0.2.1
tcpick is a textmode sniffer libpcap-based that can track, reassemble and reorder tcp streams