Space Tripper brings you one of the most hardcore arcade shoot-em-up experiences ever for Linux, Mac & PC. 14 manic levels, set ove

Space Tripper brings you one of the most hardcore arcade shoot-em-up experiences ever for Linux, Mac & PC.

14 manic levels, set over 4 stunning worlds, Space Tripper takes the shooter concept further than ever before.

Space tripper brings you the very best in retro arcade gaming. No story, No background, No plot and No friends. It's just blast or be blasted.

Inspired from Williams arcade classic , 'Defender', Space Tripper delivers probably the most furious shoot-em-up of the modern era, combined with state of the art graphics.

If you like your video games tough, then this is for you.

Everything you need comes included.A fast, highly manouvarable craft. Enough gun to take out the universe. Absolutely loads of enemies to obliterate, and some seriously mean bosses. Nothing else comes close for that classic arcade experience.

Psychedelic holographic world. Face transforming UFO's and their motherships on the way to a HUGE spider boss!

Travel to a far off world, inhabited by strange bug creatures and exploding pods. Explore further and come up against strangling worms and a deadly Snake boss.

Mysterious, trap ridden structures, waiting to snare anything curious ( or crazy ) enough to investigate. Not much known about this cursed world ... good luck!

Limitations:
Only the first 3 levels from 14 in the full version.
One world to explore, from 4 in full version. 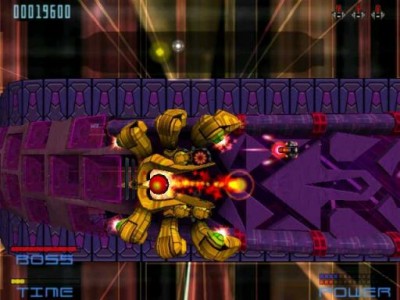 Space Tripper 1.6
Space Tripper brings you one of the most hardcore arcade shoot-em-up experiences ever for Linux, Mac & PC. 14 manic levels, set ove


Mutant Storm 1.39
Mutant Storm progresses over 89 levels of psychedelic 3D arenas, that get ever more crowded with nasty beasties


Invasion 3D 1.0.2-Linu
Invasion 3D is a fun and addictive 3D arcade game! The idea for Invasion 3D came during the summer of 2004, when I was working in


Ultratron 2.2
Ultratron is an arcade game where you have to destroy the four evil robots of the Apocalypse! The last human has been slain by evi