gmorgan is a rhythm station, a modern organ with full editable accompaniment for play in real time emulating the capabilities of comm

gmorgan is a rhythm station, a modern organ with full editable accompaniment for play in real time emulating the capabilities of commercial rhythm stations “Korg”,”Roland”, “Solton” ... also has a small pattern based sequencer like “Band in a Box”.

Uses the capabilities of ALSA sequencer to produce MIDI accompaniment.

Here are some key features of "gmorgan":
Patterns:

gmorgan uses patterns, loads 500 patterns in memory, patterns are editable in the window pattern edit. Also you can load, save banks of 500 patterns or one by one.

gmorgan uses styles and patterns for perform in real time, loads 100 styles in memory and also can be edited, load or saved in banks or one by one.

gmorgan uses sounds for perform in real time for the left and right part of the keyboard, loads 100 sounds and can be edited load or saved.

gmorgan can record all of what you play in real time plus the accompaniment generated.

gmorgan has a virtual accompaniment keyboard for generate chords with the mouse and. the computer keyboard.

You can generate the accompaniment in the sequencer window only putting the name of the chords in the bars.

gmorgan exports MIDI files of your songs (played in real time) and also for the songs made in the sequencer for bring to you the possibility to edit in a professional sequencer.

gmorgan converts MIDI file to the pattern internal format, then you can import your favorite patterns generated with other instruments.

gmorgan has a small BD, up to 18 separate parts of patterns can be stored by musical styles.

gmorgan has the possibility to add your own skins for the program, see the documentation to edit.

gmorgan is internationalized with gettext, available languages are Spanish ,French and German, hope soon can we add more. 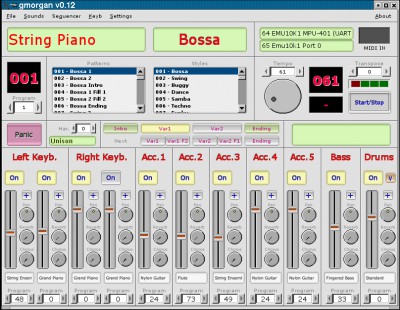 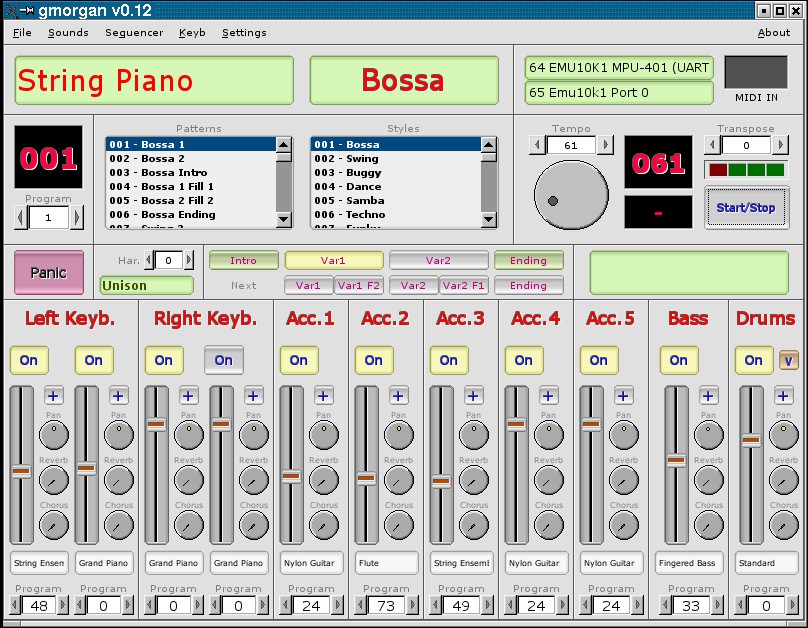 gmorgan 0.24
gmorgan is a rhythm station, a modern organ with full editable accompaniment for play in real time emulating the capabilities of comm


stygmorgan 0.27
stygmorgan is a musical instrument, is an Interactive Musical Workstation software emulator, fully configurable, but in fact does not


Hydrogen 0.9.3
Hydrogen is an advanced drum machine for GNU/Linux


Dino sequencer 0.2.2
Dino is a MIDI sequencer for GNU/Linux


LDrum 0.6.0
LDRUM is an open-source drummachine that offers ten channels, realtime control, a simple pattern sequencer and a graphical user-inter